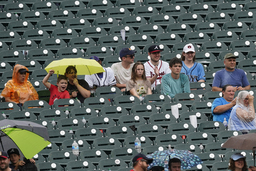 ATLANTA (AP) The game between the Atlanta Braves and San Diego Padres was postponed on Monday night because of rain and will be made up as part of a day-night doubleheader on Wednesday.

Yu Darvish was supposed to start for San Diego, against Atlanta rookie Kyle Muller. The Padres were coming off a franchise-best, 41-run three-game series at Washington, but they had dropped three of five. San Diego began Monday in third place and five games out in the NL West.

Atlanta, which won division titles the last three years, had dropped three of four and was in third place and four games out in the NL East. The Braves lost their best player, All-Star right fielder Ronald Acuna Jr., to a season-ending knee injury nine days ago and traded for Joc Pederson to fill his spot.

Darvish was reinstated from the 10-day injured list earlier Monday and was supposed to make his first start since leaving July 8 against Washington with left hip inflammation. He skipped the All-Star Game because of the injury. Darvish is winless in four career starts against Atlanta, going 0-3 with a 6.62 ERA over a span of 17 2/3 innings.

Muller has never faced the Padres.

San Diego has scored 5.45 runs per game on the road, 4.4 runs per game at home, a 1.05 differential that's the biggest of any team this season.

Padres RHP Dinelson Lamet, on the injured list since June 27 with forearm fatigue, will throw a bullpen session Tuesday and a potentially live batting practice session Wednesday. The team hopes he can return by early August.

The Braves optioned LHP A.J. Minter to Triple-A Gwinnett after he allowed two runs in two-thirds of an inning and took the loss Sunday against Tampa Bay. Minter (1-4) has a 6.75 ERA over his last 17 1/3 innings. Opponents have hit .342 in that span. ... Atlanta called up Muller before the game to make his start, placed OF Ender Inciarte on the injured list with COVID-19 symptoms and recalled LHP Sean Newcomb from Gwinnett. ... RHP Miguel Diaz was optioned to Triple-A El Paso to make room for Darvish.

The Braves have won the season series with San Diego in each of the last four years in which the two teams have played, going 18-9 against the Padres since 2016. Atlanta and San Diego did not face each other last season.

Braves RHP Touki Toussaint, on the 60-day injured for most of the year with a shoulder strain suffered in spring training, was scheduled to make his season debut on Tuesday, but the team's pitching plans are undecided with the rainout.