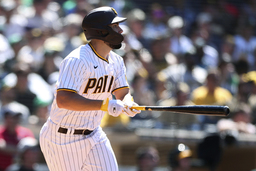 SAN DIEGO (AP) Sean Manaea took a perfect game into the sixth inning and Matt Chapman hit a three-run homer to carry the Oakland Athletics to a 10-4 victory over the San Diego Padres on Wednesday.

Manaea (8-6) kept the Padres off the basepaths until he walked former Athletics player Jurickson Profar with one out in the sixth. Pinch-hitter Eric Hosmer then lofted a bloop single to shallow center to end Manaea's bid for a second career no-hitter. The left-hander no-hit the Boston Red Sox on April 21, 2018.

Until the hit by Hosmer, who reportedly is on the trade block, the Padres hit just one ball out of the infield. That was Jake Cronenworth's flyball to left for the second out of the fifth.

Manaea struck out nine in six innings and allowed just the one hit and one walk.

In his previous start, he struck out a career-high 13 and allowed just one run and three hits in seven innings in a 4-1 win at Seattle.

"I'm just trying to be consistent every time I go out there, just getting a little bit more confidence in my stuff," Manaea said. "Go out there and try to throw up zeros, just any way I can help the boys win."

Having a 4-0 lead before throwing a pitch helped.

"These guys got a lead in the first inning so I didn't have to be too cute with anything, just go after guys and let the defense work. Just trust my stuff and attack guys. No reason to be out there trying to be perfect with everything, just go out there and throw. That was pretty much it from the get-go," he said.

"He's good," manager Bob Melvin said. "His fastball at times plays like it's upper 90s. He hides it. He's got a lot coming at you. He's got a great changeup which is a separator, which makes his fastball that much better and his breaking ball is so much better now. When he's throwing strikes and getting ahead, throwing hard like that, he's a tough guy to deal with whether you're right-handed or left-handed."

Elvis Andrus had three hits and two RBIs for the A's, who split the two-game series.

Blake Snell (4-4) had another short outing for San Diego, allowing seven runs and seven hits in four innings. The lefty walked four and struck out one.

Snell struggled from the start, walking three of the first five batters and then giving up the three-run homer to Chapman that put the A's up 4-0. Snell walked leadoff batter Mark Canha on four straight pitches and walked Matt Olson with one out before Jed Lowrie's sacrifice fly. After Sean Murphy walked, Chapman drove an 0-1 fastball off the side of the second deck in left field, his 13th.

Canha added RBI singles in the second and fourth, and Andrus also had an RBI base hit in the fourth. Andrus had another RBI single in the seventh, when the A's scored three runs on three hits and two errors to go up 10-0.

Austin Nola hit an RBI double in the seventh for the Padres. They added three runs in the ninth, including on Profar's double and pinch-hitter Victor Caratini's single.

The contending A's obtained OF Starling Marte from the Marlins for left-hander Jesus Luzardo. Oakland, which began the day six games behind AL West leader Houston, also acquired left-handed reliever Andrew Chafin this week from the Chicago Cubs. Marte, 32, is batting .306 with an .859 OPS and 22 stolen bases in 25 attempts. It's the third time in 18 months that Marte has been traded.

Athletics: RHP Frankie Montas (8-8, 4.34 ERA) is scheduled to start Thursday night in the opener of a four-game series at the Los Angeles Angels, who have not named a starter.

Padres: RHP Joe Musgrove (6-7, 3.13) is scheduled to start Thursday night in the opener of a four-game series against the Colorado Rockies, who will counter with LHP Kyle Freeland (1-5, 4.85).