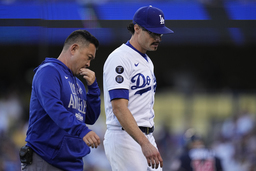 LOS ANGELES (AP) Dodgers opener Joe Kelly gave up a two-run homer to Atlanta's Freddie Freeman in the first inning and soon exited with tightness in his right biceps Thursday night as Los Angeles tried to avoid elimination in Game 5 of the NL Championship Series.

The Braves led three games to one going into the matchup at Dodger Stadium.

Adam Duvall followed Freeman to the plate and had a 2-2 count when catcher Will Smith went out to the mound. Pitching coach Mark Prior and manager Dave Roberts joined them and Kelly then walked off, leaving after two-thirds of an inning and 28 pitches.

Evan Phillips came on in relief and struck out Duvall to end the first with Atlanta leading 2-0.

Ozzie Albies singled with one out and Freeman homered.

Kelly started off what was planned as a bullpen game. He had pitched a total of 2 1/3 innings against Atlanta in the NLCS, not allowing any runs.

Dodgers third baseman Justin Turner injured his hamstring running to first base on Wednesday and is done for the season. MLB approved third baseman Andy Burns as a roster substitution.

Turner is not eligible to return for the World Series, should the Dodgers rally to win the NLCS in seven games and advance.